Home Chances of being bitten by a Snake, Shark or Spider and what to do about it

Chances of being bitten by a Snake, Shark or Spider and what to do about it

Chances of being bitten by a Snake, Shark or Spider

Australian Snakes, Sharks and Spiders and what to do if you meet one

Australian Snakes, Sharks, Spiders and other nasties are responsible for tens of thousands of nightmares and spine tingles every week. Thankfully the chances of being bitten by a Snake, Shark or Spider are significantly less.

Chances of being bitten by a shark

The long-run average is one death per year and about four times as many attacks. More recently fatal attacks have increased to around 3 a year. You are still far more likely to drown or die in a car crash than be killed by a shark. The very recent increase in attacks and fatalities is worrying and no-one seems quite sure why. It could just be that over the next few years the numbers will decline again.

Number of Shark Attacks in Australia

Who do sharks attack? Who is most at risk?

It is mostly surfers and scuba divers who have suffered a fatal attack. According to the statistics nobody has died in shallow water. Swimmers have been bitten but it only proved to be fatal in deep water.

You could say the numbers reflect what we might regard as common sense. Relatively speaking, the more time spent in the water and further from shore you venture the more likely it is you’ll be attacked. The key word is relatively. It is still very, very unlikely.

How to avoid a Shark Attack

With the huge amount of media coverage that a shark attack generates it may seem as though no toe should come anywhere near the water. You can make your toes and the rest of you even safer by following the advice below:

How to avoid a Shark Attack

Risk of Shark attacks and swimming with Sharks

A commonly held belief is that sharks can mistake someone in a wet suit and/or flippers for a seal. I’m not aware of any evidence to back this up. What is proven is you can reduce the risk of a shark attack by staying out of the water from dusk to dawn. Sharks are generally more active during this period. Another precaution you could take is to avoid engaging in any activity where sharks are known to feed, like swimming with them in an aquarium.

Snakes are rarely found in the centre of Sydney or anywhere around Sydney Harbour. One exception where you might come across a snake is Lane Cove National Park but again, unlikely.

Snakes in the Bush

The bush and rural areas around Sydney have more snakes living in them. The more you travel into these areas, the more likely it is you will meet one of them. If you are planning a trip out of Sydney consider making a few stops between Sydney and Brisbane. Fatigue can be a lot more dangerous than snakes.

Steps to take to avoid being bitten by a Snake

Most snake bites occur because a snake is attempting to protect itself. If you want to know what steps (literally as it turns out) you can take to avoid being bitten by a snake follow the link below:

How to Avoid Snakes

You could just stay indoors but Australia boasts some of the world’s deadliest and most poisonous spiders and they aren’t all the outdoor type. Australia also has world-class hotels but it still seems a waste to spend all your days inside – although there’s skin cancer to consider.  🙂 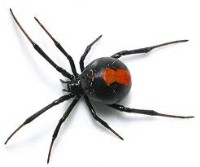 Spiders can be more in your face than snakes. Some quite like hanging around homes and gardens. The Australian Redback Spider‘s red markings are a warning. I’m poisonous, leave me alone!

But before you start cancelling your bookings you are highly unlikely to even see one unless you are staying at someone’s house that hasn’t been sprayed for pests.

Hotels, B&Bs, Hostels should all have cleaners and gardeners who are at risk, to some extent, of actually seeing one but very unlikely to be have been bitten. As you will see from the stats below, nobody has died from a spider bite for some time.

Still, perhaps it is wise to be careful around spiders just in case. Follow the link below in case you ever need to remove a spider from your presence.

How to deal with a Spider

So what are the risks? Here are the stats:

Cause of Death, Total Deaths and Average per year

No deaths by Spider Bites?

The killer spiders are the Redback and funnel-web spiders. Of the funnel-webs only the males are deadly, not that you want to get close enough to be able to tell the difference. 🙂 The good news is that since antivenom has become widely available hardly anyone has died from a spider bite. Of the thousands of people who do get bitten in Australia each year, only a few hundred required the antivenom.

No deaths from Snake bites?

According to recent media reports (because someone unfortunately died due to a snake bite in rural Queensland), there are estimated to be 3,000 snake bites in Australia every year but only two deaths. Of the 3,000 bites less than a fifth required antivenom. So what’s wrong with Australia’s snake population? Australia is home to some of the world’s most venomous snakes but they don’t seem to doing a particularly good job of killing us. 🙂

Too big to eat

The reality is, from a snakes prospective, we are too big to eat and too slow to be a real threat.

You should also bear in mind that many of the snake attacks would be of people who handle snakes, keep them as pets or otherwise live, or work, in close proximity to the beasties.

In the extremely unlikely event you are bitten or witness someone else being bitten, do not try to attack the snake as it moves faster than you do and will probably have another go.

What should you do if you witness a Snake or Shark attack?

Most of the top things to do in Sydney are concentrated around Sydney Harbour and the centre of town. So you are quite safe from the snakes if that is where you are likely to be.